skip to main | skip to sidebar

The MINI at one year

One year into owning my MINI, I must admit I like it more now than ever. It is a great car for what I need, it is as simple as that. Would other cars be as great? Maybe. And those cars may have been cheaper to buy, too. But I still really like my car for these reasons:
Ok, I admit, like any car there are flaws:
Expensive to own? I think not. I spent $29 for my state inspection, and a few bucks for oil (see above). And with the mileage what it is, I figure I spent about $850 for gas that took me 11,000 miles. And there has been nothing to complain about, quality-wise. The only trip back to the dealer has been the first year check in, and that was free. They took care of the inspection, and gave it a wash.

I doubt that many car companies can provide all that for under $23K, as well equipped as my little one year old.
Posted by GBG at 12:54 PM No comments:

Honda = Not So Ugly

No photos here. Just pop yourself over to the Honda Site. While the Accord sedan is somewhat big these days, and the styling a little over worked, the coupe is quite nice in a "girl car" kinda way. I actually like girl cars, so I mean that in a good way. The Civics are good no matter how many doors you want. The new Fit is looking quite up to its name. Now, do they still make Pilots and Timberlines?
(I saw a guy with a very dark colored Timberline today (do they come in light colors?). He had the car, the hairdo, the blond babe in the passenger side. Wow, I thought, that is so pre-recession! Although I am not sure if or when that particular hairdo was in style.)
The Element was supposed to be sorta ugly, so it hits the mark just fine. I even like that they are offering it with painted body panels, rather than so much black plastic. A little color never hurt anything.
Lessee, what else is there? Oddessy, whatever. No fun talking about mini-vans. The CRV, now that is a POS. Never understood what the point was. Can't really go off road. Gets crappy mileage on the road. It is dead for me. Same thing with Toyota RAV4 (logo looks more like RAVA. Check it out). And all those other things that are high, short, and look more like children's toys than actual cars for driving.
And of course, lets not forget the S2000. Nothing wrong there. Nothing at all.
Posted by GBG at 3:44 PM No comments:

I have only a few words on this subject: Nissan Altima Coupe, Nissan Rogue, and yes, the Nissan Maxima.

Maybe it looked okay in the renderings, but it lost it when it became a real solid object. The volume of the rear window as it fades into the trunk, the character line that runs down the side, and the mash up angles within the rear facade all conspire to say this baby's mom was thinking about all the options in her early months. 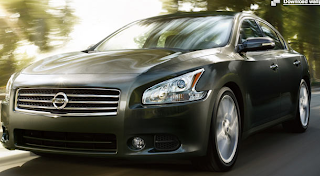 Ok, can we start with the headlights. Not good. Generally speaking, barbed things are painful. This is no exception. Moving on, the protruding grill section of the front is quite the opposite. It looks like it was designed to absorb any incoming pedestrians, light poles, or buildings the car might happen on. Plain. Ugly. Acres of sheet metal with nothing to do. 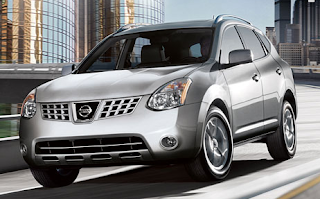 Speaking of nothing to do, this piece of Japanese American Cheese is about as tasty as it sounds. There is no good angle from which to view this vehicle. None. You can throw three separate grill treatments at it, and it still has too much sheet metal up front. The designers let the wheel openings dictate the shape of the front of the car, which worked on the VW New Beetle, but not here. Must I go on?
The bright spots at Nissan? The Cube because it is so odd. The Z. And as I have said before, the Sentra still looks like a nice, tight package to me. And I look forward to the Versa update, if there is one.
Posted by GBG at 7:23 PM No comments:

One's affections are not logical

This weekend, I got a chance to fire up the Falcon, and in the process of doing so had to jockey the rest of the fleet around in the driveway.
Sounds simple, you say, but the problem is the Volvo has been a bit off lately. Seems ever since we had the brand new ($500) radiator put in by the local garage, the throttle has been a bit sticky, especially in the cold weather. That means when you start it, it just might be stuck full open, roaring to life as never before. Further attempts have shown it to rev very high when you merely tap the pedal, or get stuck full on, even if it starts out OK. 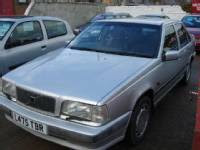 So it was with some trepidation that I approched the Volvo with key in hand. But on this relatively warm weekend, it started up OK, and proceeded to just be a bit revvy, not really sticking but going a bit beyond what I expected. I warmed it up, and got the car moved out onto the street where I can park it while toying with the wagon.
While I fully enjoyed taking out the Falcon, I also seem to have rekindled a long lost affection for the Volvo. The solid feel of the door. The rolling brick shit house drive quality, apparent even when just re-parking the car.
So maybe we will keep the old Volvo. A while longer. Sure is cheaper than buying Mr. Domestic Partner a new ride. At this point, the throttle cable has been fixed for $32, and the car successfully delivered us and friends on an outing of some 75 miles. She rolled over to 250,000 miles enroute. I even filled it up with "something in the middle."
Yes, the old girl is back in the good graces again.
(the Volvo in that picture is not our car, but a reasonable facsimile. No, we dont have those funny plates here in MA. And the wipers on our headlights are more out of joint than those in the picture. I don't think I have a picture of our car. I have pictures of the Falcon and the MINI though. Maybe I will get the camera out this weekend.)
Posted by GBG at 8:33 PM No comments:


Well, that is too bad. I had seen some pictures of the 2010 Mazda3 5 door, and was not too worried. But more and better pictures have shown up on the Mazda site, and it is a bit worrisome. Is there any way to only buy the back 2/3 of the car? That part is working, but not much of the front is working at all.

First there is the big smiley faced grill, which is really mostly the bumper in disguise. Disgusting. Then there are the side grills, fashioned to look like air intakes for the brakes or some such thing. Well, they look fake. Sorry.
Not only are there some ridges that run up the hood just inboard of the headlights, but there are big shoulder ridges around the wheels. Seems they borrowed those from the new beetle. One or the other of these ridges might have worked, but to try to get both in there makes a mountain out what was a pretty nice mole hill.
Moving further back, things settle down, but there is that ridge that starts on the driver door, down low, and ends in a kick-up. It kinda mimics the smiley-grill, but brings to mind the Toyota Matrix. Not in a good way either. This car should never remind you of a Toyota Matrix.
Oh well. There are enough of the original model of the Mazda3 out there so that one should be able to find a clean low mile example for some time to come. Until they fix this one, that is what I will plan on doing when the Volvo finally bites the dust.
Posted by GBG at 8:13 PM No comments:

A New Era of Malaise Mobiles?

Everyone has fond memories of mid- to late-'70's domestic cars. These over sized and over wrought barges were ugly when new, and are ugly still. Case in point:
Anything with stacked rectangular headlights, opera windows, half vinyl roofs, or painted in colors like "jade" or "burgundy-fire". These things often started out as fairly well designed cars that through both regulation and economic factors, kept getting stuff added on, like big bumpers, and gigantic grills made to emulate Mercedes. 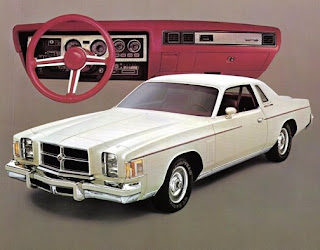 Well, the automakers face severe challenges, with limited resources to develop new product, and will certainly beforced to clamp ever more "features" onto existing designs. What do you see as the Malaise Mobiles of the new century?
Here are my suggestions:
The GM crossovers. These just dont do enough to get people out of their current SUV and into something alot more efficient. They look better than the lumpy older SUVs, but there will be no money to improve them, so look for them becoming dated, added to with more techy veneer and flash.
Ford 500/Taurus: They are simply too big, boring and non-descript. The new design tries to breathe life into the car, but it falls short looking rather gimicky. Same old car with new stuff bolted on, the perfect malaise recipe.
Chrysler: In general, Chrysler. It seems unlikely they will have anything new to offer for a while, and will have to tweak existing product for a while. A long while.
Posted by GBG at 3:35 PM No comments:

Well, I just cant hide my excitement. The Detroit Auto show brought us no less than 4 new wagons and/or hatches to drool over. Sure, most were announced before hand, but seems like enough are on the horizon to keep things exciting. 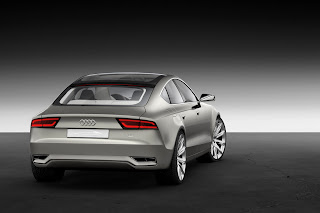 Probably the most beautiful is the Audi Sportback. Not only does it look great from the side and rear, but they finally worked out something with that grill to make it look almost OK. 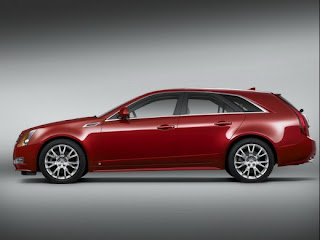 Cadillac is still moving forward with the wagon
version of the CTS. Not exactly my cup of tea, but I am glad to see it come along. 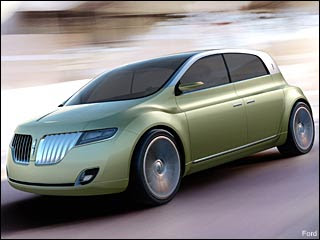 Another high-end mark, Lincoln got into the mix with its C concept. Looking more like a Renault than the usual FoMoCo offering, it is something that suggests luxury and aggressive futuristic design can go together. Love to see this on the market.
On the other end of the spectrum, Chevy was showing off the tiny Spark, which looks a bit more fun than a Fit. Ford is just brought out the rather humongo Flex, which comes with a supersized serving of MINI-envy. I am waiting for a Focus wagon type variation, or at least a low-rider Edge. Chrysler might end up as the American marketing and distribution arm for Fiat, bringing a whole range of Alpha Romeos and Fiats, including the new 500. All in all, not a bad outlook.
Except for that whole economy thing...
Posted by GBG at 6:59 PM No comments:

GBG
By day, a well meaning book designer. Walks to and from work, affording lots of time to think about what is driving by. Weekends, divides attention between 1965 Falcon Squire, 2008 Mini Cooper, and a helluva lot of yard work.